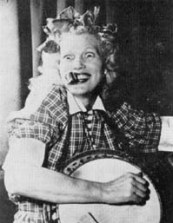 Due to its continued existence and legendary roster, the Grand Ole Opry has long been the most well-known country radio show. But it wasn’t the only one, and each of the big shows had their own eclectic cast of stars. On the WWBA Jamboree show out of West Virginia, the biggest star was Cousin Emmy.

She was a multifaceted performer who could play more than a dozen instruments, and she had a more outsized personality than any woman in country music history. With crimson-red lipstick and bright blonde hair tied up in ribbons, she had a look that could make Dolly Parton say “that’s a little too much.” But like Parton herself, her campy personality and aw-shucks humor masked a tremendously talented and fully independent business woman.

For a woman who only went to school for two weeks, she was incredibly shrewd, capitalizing on every opportunity that came along and learning from the mistakes made by earlier hillbilly performers. She came from a musically inclined family in Kentucky, and she got her first big break when she won the 1935 National Old-Time Fiddlers Contest in Louisville. She was the first woman to win. This led to a stint at WWVA in Wheeling, West Virginia. During her time at the station, she taught Grandpa Jones how to play the banjo.

Her popularity soared as she played on radio stations across Appalachia, and she noted that she was more popular than any man. She demanded top billing, as she could outdraw anybody else and didn’t need to play second fiddle to male acts less popular than her. Soon, she was the first fully self-sufficient female touring act in country music history.

She was the subject of a glowing feature in Time in 1943, as her popularity began to peak. She became fiercely protective of her copyrights, insisting that she get paid for her compositions. She had seen earlier hillbilly musicians get ripped off and was adamant that the same fate not befall her. Her business acumen earned her the bragging rights of being the first hillbilly star to own a Cadillac.

She didn’t record much, but what she did put down on tape was crucial for the preservation of early country music. In 1947, she recorded Kentucky Mountain Ballads, a collection of Appalachian mountain songs. She penned her own hit single, “Ruby (Are You Mad at Your Man),” and had her performances captured on film when Hollywood came calling. For a time, she lived out in Los Angeles while appearing at Disneyland and on the big screen in Swing in the Saddle, Under a Western Sky and The Second Greatest Sex.

When the folk revival hit in the sixties, the New Lost City Ramblers convinced her to record with them as her backup. She went back out on the road with the group, and was heavily featured in the Pete Seeger-produced series Rainbow Quest. The performances, widely available on YouTube, found Emmy backed by the Clinch Mountain Boys and preserved not only her singing and picking for the ages, but her legendary performances of “Turkey in a Straw,” played by slapping her cheek, and “You Are My Sunshine,” played by strategically releasing air from an inflated rubber glove.

Viewers of such performances today might understandably believe that they are witnessing the ultimate in lowbrow hillbilly silliness, but the woman on that stage was not only a smarter businesswoman than most country singers in history, but also preserved the history of country music with her work.