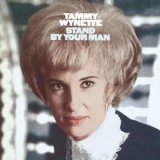 Stand By Your Man
Tammy Wynette
1968

It was a seminal moment in a career filled with them, but the recording of “Stand by Your Man“ has contributed considerably to the world of country music. It caused the questioning of gender roles and stirred up dialogue about how far a woman’s heart can stretch in the face of her man’s transgressions.

“Stand by Your Man” was reportedly written in 15 minutes, the creation of Wynette and her producer, Billy Sherrill. Wynette’s gorgeous performance is sympathetic yet strong.  As always, Wynette possesses a heartbreaking quality in her voice, but still remains as calm as ever. Her declaration of love for her man is powerful, despite the admission of his sinful dealings. The song is an ode to a faithful, supportive wife and the understanding that her man has faults and failing, but she will continue to stay by his side. Feminists criticized the song, believing it was belittling to women, but Wynette defended the song profusely. Her intent, she said, was to call women to forgive their wayward men.

Following shortly after her great breakup ballad, “D-I-V-O-R-C-E,” the ode to loyalty soon became what Sherrill would call her signature song. Released as a single in late 1968, the song reached No. 1 on the country chart for three weeks, and also became a No. 19 pop hit. The classic anthem to faith and fidelity also won Wynette her first Grammy for Best Country Vocal Performance, Female in 1969.

New controversy marked the song in the early 1990s when soon-to-be First Lady Hillary Clinton told CBS’ 60 Minutes that she “wasn’t some little woman ‘standing by my man’ like Tammy Wynette.” Wynette demanded an apology, and Clinton retracted her statement. Later, in a gesture of reconciliation, Wynette performed at a Clinton fundraiser.

Different perceptions surround the song, but Wynette’s portrayal of a forgiving woman evoked strength and power, lending evidence to the belief that “Stand By Your Man” is till-death-do-you-part devotion rather than blind faith in a faltering love.