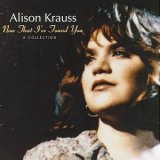 With “When You Say Nothing at All,” written by Paul Overstreet and Don Schlitz, the magic is in the calm and the quiet. The song was a poetic ode to the desperately devoted, and countless people connected with the simple song of love’s mysterious ways. In the narrator’s view, love is often at its most powerful when no words are needed, and even the wordsmith Webster couldn’t define the divine emotion. The song’s multiple readings have resulted in uniquely different takes on the graceful lyric. The two most notable recordings sprung from a troubled singer whose music continues to impact audiences twenty years after his death, and a pure vocalist whose heavenly strains have enraptured country and bluegrass devotees for almost two decades.

Keith Whitley recorded the original version of the ballad, and released it as the follow-up to the title track of his album Don’t Close Your Eyes. His effortless vocal matched perfectly with the uncomplicated nature of the song, and fans responded to the sweet, straightforward message. “When You Say Nothing At All” wound up as Whitley’s second #1 single in December 1988, and stands as one of his five consecutive #1 singles during the late 1980s. Unfortunately, Whitley died of alcohol poisoning in May 1989, just six months after the song reached the top of the charts.

Alison Krauss, a ten-year veteran of bluegrass music at the age of 23, recorded “When You Say Nothing at All” with her group, Union Station, in 1994 for a tribute album to Whitley. After the song started to receive unsolicited airplay, BNA Records issued Krauss’ version to radio in January 1995. That version, also featured on Krauss’ compilation Now That I’ve Found You: A Collection, reached #3 on the country singles chart in the spring of 1995.

The song became the centerpiece of a career year for Krauss and Union Station. Krauss alone won four CMA awards that fall, including Female Vocalist of the Year, and the group’s recording of the gorgeous ballad won the award for Single of the Year. Numerous accolades have marked their country music journey since that evening, and they quickly moved into public awareness far beyond the bluegrass community that had embraced them previously.

That success, and the legacy of Keith Whitley as a masterful traditional voice, can partly be attributed to this classic country song.   The universal significance of “When You Say Nothing At All”, a gentle reminder about the tender triumphs of genuine love, carries far beyond any number of trials and troubles that may break life’s precious moments of silence.