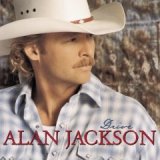 With country music in a constant state of flux, Alan Jackson stands as the format’s standard bearer for no-frills, no-fuss country music, devoid of all the trappings of both dated production styles and newfangled studio procedures. He straddles the line between tradition and contemporary stylings with greater ease than most any current commercial recording artist in the genre.

On Drive, Jackson proves himself a worthy spokesman of the very values that country music espouses at almost every turn. His straightforward takes on life and love are heartfelt without devolving into the emotionally maudlin tones that have permeated through Nashville in recent times. Jackson also provides a certain humor that speaks to the commonfolk, but never filters his material to pander to the audience.

The centerpiece of the album is the title track, a loving look at his father’s guidance and the bond they shared. It’s a three-act story that works, with Jackson reminiscing about Daddy Gene’s driving lessons and the memories they made together, along with the memories that he now makes with his three daughters. Simple and elegant in both message and production, it’s a standout in his career.

Jackson expounds on the power of love and the loneliness in its loss with two terrific tracks “When Love Comes Around” and the forlorn ballad “The Sounds,” both penned by Jackson himself. The Mark Irwin-Irene Kelley collaboration “A Little Bluer Than That,” a saddening song about down-to-the-bottom blues, is also a worthy inclusion on the stellar set. Jackson also duets with a fellow traveler on country music’s traditional highways when George Strait joins him for the fun, if lightweight, track “Designated Drinker.”

And of course, the most famous song on the collection is the 9-11 tribute “Where Were You (When the World Stopped Turning),” an eloquent ode to the World Trade Center tragedy and a neat summation of Jackson’s greatest talent, the skill to channel real-life occurrences and important emotions into moving, three-minute commentaries.

Jackson’s vocal abilities continue to grow with every album, and he manages to instill the ballads with just the right amount of sorrow while delivering the uptempo numbers with flair. Drive is a contemporary country album that, with a few new twists, is still a country album. With a healthy dose of honky tonk tricks and the distinctive flavor of fiddle and mandolin, it never delves into the pop-country that continues to gain in popularity. Jackson carries on a tradition of true singing and songwriting poetry that has marked the legends of the genre since its early stages.