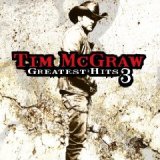 If it seems that Tim McGraw’s latest hits collection came pretty soon after his last one, you’re not losing track of time.   It was only two and a half years ago that Greatest Hits Vol. 2 was released, complete with four new tracks attached to its generous helping of twelve previously released hits.   Why on earth would Curb be releasing another hits collection, even while they’re still working the title track of his 2007 studio album to radio?

We all know the answer to that question, so I won’t bother to explain what motivates cash-strapped labels. What I will do is evaluate this on its own merits.  Greatest Hits 3 collects some essential Tim McGraw singles.   In addition to featuring “If You’re Reading This”, a classic from his last album, and “Last Dollar (Fly Away)”, the biggest hit from that set, Curb has gone back and collected some songs that were inexplicably omitted from the previous two sets.  The most notable older cuts here are  “Back When”, “Can’t Be Really Gone” and “Angry All the Time.”

But other choices made here are a mystery.   They revisit the admittedly entertaining “Do You Want Fries With That” from  Live Like You Were Dying, but do not make room for the far superior “Drugs or Jesus.”   His last album featured a stellar duet with Faith Hill in “I Need You”, but that cut is overlooked for “Suspicions”, which wasn’t much of a hit in the first place.

The album is then padded out with a live version of “Real Good Man”, a song that was included in its original form on the previous hits album; the crowded multi-artist version of Tracy Lawrence’s “Find Out Who Your Friends Are”; and “Nine Lives”, his loud and bewildering pairing with Def Leppard.

Ultimately, Greatest Hits 3 plugs up some holes in the record collection of those who have just bought the hits albums.   But even in that situation, the consumer would be better off cherry-picking the handful of worthy tracks here.   As a stand-alone compilation, it fails to serve a purpose.   Collectively, the songs don’t tell the story of Tim McGraw’s music.  At least the previous two sets were somewhat definitive overviews of the first and second phases of his career.   This collection is a scattered, undefined and incomplete portrait of a significant country artist, and does no justice to the artist or the listener.