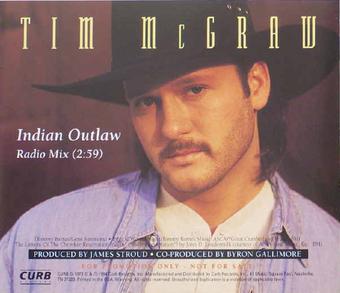 The distinction of being Tim McGraw’s first Top 10 hit could hardly have gone to a more  oddball song.

Ever had one of those songs that you used to enjoy when you were younger, but then you kind of… I dunno… grew up and then realized it wasn’t that good?  This is one of those songs for me.  It’s catchy, to be sure.  Tim puts a lot of character and personality into his performance, and the fiddle and tom-tom-driven arrangement is infectious.

But the lyrics… Oh, how stupid.  In lyric, “Indian Outlaw” amounts to little more than a hodgepodge of Native American cliches.  The village chieftain and the medicine man both get shout-outs.  So do the tom-toms and tee-pees.  Then it samples the “Cherokee people” chorus from co-writer John D. Loudermilk’s earlier composition “Indian Reservation.”  It all makes very little sense.  Not surprisingly, the single stirred controversy due to its stereotypical portrayal of North American Indians, such that some radio stations refused to play it, though that didn’t stop it from going Top 10.

The single still holds a small shred of appeal to me, primarily because of the way it sounds.  So I could be somewhat generous and dub it a simple “catch me in the right mood” kind of novelty song.

…But seriously, how can I possibly get behind “buffalo briefs”?!