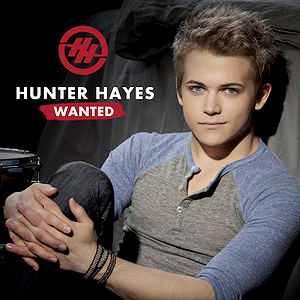 With song titles like “Storm Warning” and “Rainy Season,” one might very well wonder if Hunter Hayes had at one time been an aspiring meteorologist.  At any rate, the frosty-haired twenty-year-old has been gradually making inroads on country radio with the support of his hordes of cheering female fans.

So far, it's a familiar story:  A strong voice crying out for strong material.  While the addicting sonic groove supplied some redemption as “Storm Warning” continued stretching its metaphor to ridiculous extremes, “Wanted” offers little more than four minutes of meh, with scarcely a memorable melody or hook to grab onto.

Similarly, the lyric is almost groaningly simplistic.  The chorus says nothing except that the narrator wants to “Wrap you up,” “kiss your lips,” “call you mine,” etc.  The hook of “I want to make you feel wanted rings hollow, while the line “I don't know how you do what you do” has reached a point where it should be banned due to constant overuse.  “Your beauty is deeper than the makeup” is a decent line, but too thoroughly surround by mediocrity to be of any substantial merit.

That said, “Wanted” displays a little more sonic restraint than the typical mainstream country single, which is appreciable.  Swelling strings threaten to push it over the top in the bridge, but such are ultimately kept in their proper place.  Though Hayes' performance takes on added forcefulness toward the end of the song, he refrains from flat-out wailing.  At the very least, the doesn't hurt one's ears, but that alone doesn't extend its appeal beyond its four-minute running time.

Perhaps Hayes could be an interesting artist one day, as he clearly possesses a measure of talent, but it won't be with songs like this.  “Wanted” is a song that is consistently uninsteresting, clichéd, and flavorless, and not even playing every instrument on the album is going to fix that.