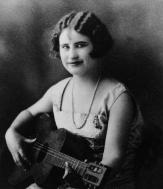 It’s a historical fact that is taken for granted. Women in country music were as limited in expressing their liberation in song as they were in real life. There’s some truth to that, as evidenced by many of the records released as the women’s rights movement was in full swing.

But the first woman to ever record a country record on her own sang a song with a refrain that would make a feminist of any era proud:

I am single and no man’s wife, and no man shall control me

Roba Stanley was only fourteen years old when she first went into a recording studio and sang, but she was already a music veteran. Her father, Rob Stanley, had been a traveling country musician for decades, and in his later years, he had Roba perform with him. Performing as The Stanleys, they garnered exposure on WSB radio, which led to an offer to record in 1924.

She would later be dubbed “America’s first country sweetheart” because she was the first woman in history to record solo country songs. Her first session yielded “Devilish Mary”, a saucy number about a just-married woman who responds to a pushy husband by hitting him upside the head with a shovel.

A few months later, she was back in the studio again, where she recorded “Single Life” at the age of fifteen. The song had been around a long time, and is better-known by The Carter Family, who made significant changes to it. Sadly, it was also Stanley’s swan song as a recording artist.

She turned down the opportunity to tour, and chose instead to abandon the single life she had sung about, marrying at the tender age of fifteen and retiring from the music industry. In total, she had only recorded nine songs. There’s no telling where her music might have taken her should she have chosen to continue, but her husband did not want her performing, and they moved to Miami, Florida, where she had no access to the recording studio or performing life.

However, Stanley’s legacy was firmly established with those early records, as she found out in her twilight years, when she was saluted from the stage of Grand Ole Opry during a visit their with her family. Recordings of her work are hard to come by, but can be found on scattered compilations like the indispensable Flowers in the Wildwood, which opens with “Single Life.”