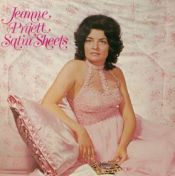 Grand Ole Opry legend Jeanne Pruett is often dismissed as a one-hit wonder, despite charting several top ten hits. Such is often the case when an artist records a monster song. Just like Jeannie C. Riley will always be “Harper Valley P.T.A.” and Lynn Anderson will always be “Rose Garden,” despite numerous other hits to their credit, Jeanne Pruett will forever be “Satin Sheets.” But as vital a record as that 1973 single was, Pruett’s legacy is longer than just that hit and those that followed. She’s one of the first female country artists in history to start as a songwriter first, gaining credibility with her pen more than a decade before her voice was center stage.Born Norma Jean Bowman in 1937, she was a teenager when she married her husband, Jack Pruett. He was a guitarist looking for work in country music, so the pair moved to Nashville in 1956. While her husband would eventually end up playing guitar for Marty Robbins, Pruett became the legend’s secretary. Soon, she was writing more than just memos, as she established herself as a top-rate songwriter. Female songwriters were hard to come by in those days, but Pruett found success, including writing a top fifteen for her boss, “Count Me Out,” in 1966.

The sixties found Pruett scoring songwriting cuts but finding little success as a recording artist. Even once she signed with Decca and began to chart in the early seventies, radio didn’t bite, but other artists did. Conway Twitty covered her first chart hit, “Hold On to My Unchanging Love,” and Marty Robbins took her second, “Hold Me”, into to the top ten, a mere year after Pruett’s original had stopped at #34.

Interestingly, it took another writer’s song to make her a star. Decca had just changed its name to MCA when she recorded “Satin Sheets” in 1973, it was an instant smash, topping the country chart for three weeks and scoring her nominations at the CMAs and the Grammys. The hit also helped her secure a childhood dream: becoming a member of the Grand Ole Opry. She was inducted shortly after the song topped the charts. The album of the same name held the #1 spot for a stunning eight weeks, the second-longest run in history by a female artist at the time.

She had a hit with the follow-up, “I’m Your Woman,” but for most of the seventies, she watched good records fall short of expectations. Four more years of recording for MCA garnered a scattering of top forty hits, but it looked like her career had already faded. When she signed with IBC, an independent record label, it seemed the final death knell of her career.

Things started off poorly when the first single from her IBC album, Encore, stopped outside the top forty. “Please Sing Satin Sheets For Me” didn’t sound like the record of an artist serious about a comeback. But Pruett shocked observers when she hit the top ten with a song she co-wrote, “Back to Back.” Two more top ten hits followed, resulting in a longer hit streak than she was able to pull off in the wake of “Satin Sheets.” The album sold strongly, giving Pruett a satisfying comeback.

Though she left the label afterwards and never hit the upper reaches of the chart again, Pruett continued to keep a high profile as an Opry member. She approached the Opry with the idea of an all-female show, and they agreed. Pruett guested on the first-ever all-lady Opry block with Connie Smith, Jan Howard and Jeannie Seely, in February, 1986. Honky-tonk legend Jean Shepard served as host.

Pruett also gained a reputation as a culinary master, publishing a series of cookbooks called Feedin’ Friends and hosting her own cooking show on TNN. Visitors to Opryland, the theme park near the Grand Ole Opry that was the predecessor to the unfortunate Opry Mills Mall, could buy treats at “Jeanne Pruett’s Satin Sweets.”

In 2006, she retired from performing, but she is still an Opry member in good standing and is an active member of the North American Country Music Association, hosting their annual seminar in Pigeon Forge, TN just last year. She’ll always be remembered for “Satin Sheets”, but the ground she broke as a female songwriter is also worthy of recognition. Recent country fans should also take note, as all of those former major label acts who have been finding resurgence on independent labels are not doing something entirely new, as Pruett proved that it could work nearly thirty years ago.