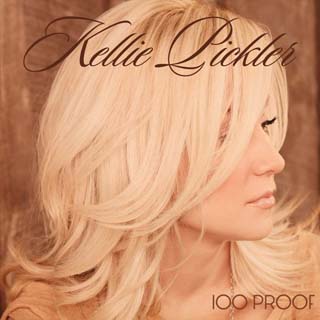 From early on, it was announced that Pickler’s third album would more closely reflect the sound of the traditional country music that is closest to her heart, with Pickler claiming to have made the album “as country as I was allowed to make it.”  The bouncy steel guitars chords of opening track “Where’s Tammy Wynette,” and opening lyrics “While I’m torn between killin’ him and lovin’ him/ He stays torn between neon lights and home” quickly announce that Pickler is not kidding.

Does that mean that the album is a retro effort?  Not necessarily.  Rather, Pickler and her producers Frank Liddell and Luke Wooten effectively craft a sound that gives a respectful nod to country music’s past while simultaneously making tasteful use of modern sounds.  Thus, the album carries a strong traditionalist bent, but sounds vintage without sounding dated, demonstrating that it is indeed possible to create a fresh and modern contemporary country album while still maintaining a strong connection to the traditions of the past.

Ultimately, what really makes the album work is the fact that Pickler sounds at home and in her element throughout.  Though her technical vocal abilities are rather limited, the song selections and stylings of this album serve her well, highlighting her strengths as an interpretive singer.  Pickler herself takes writing credits on six tracks, collaborating with songwriting talents such as Dean Dillon and Leslie Satcher.  While she opts for softly wistful vocal takes on ballads such as “Long As I Never See You Again” and “Turn On the Radio and Dance,” she throws herself into the groove of “Unlock That Honky Tonk” with a loose, infectious energy.  “Rockaway (The Rockin’ Chair Song)” is just a simple charming delight of a song, with a lightly catchy melody that lingers in the head long after the song has ended.  Pickler longlingly sings “Don’t stop rockin’ with me, baby” while soft, airy fiddles lend the song a pleasant breezy feel.

While “Where’s Tammy Wynette” is unfortunately tainted by association with the ill-advised name-dropping craze, it’s actually a surprisingly decent song in which a wronged housewife looks to the honky tonk heartbreak queens of the past for advice and inspiration.  Like the 2008 Heidi Newfield hit “Johnny and June,” Pickler’s “Tammy Wynette” manages to reference a legend in a way that feels genuinly reverent and fleshed-out instead of superficial.  Even better is the straight-to-the-point “Stop Cheatin’ On Me” which has lyrics that sound thematically reminiscient of Loretta Lynn’s “You’ve Just Stepped In (From Stepping Out On Me)”  The female narrator counteracts her man’s philandering ways by threatening to repay in kind, while the song is backed by a steel-laden arrangement steeped in country tradition, the likes of which are rarely heard on country radio these days.

There are moments when the formula hits weak points.  Lead single “Tough” was written by Leslie Satcher, and was written for and about Pickler, supposedly inspired by her troubled childhood – an approach that is reflected in the song’s accompanying music video.  Unfortunately, it’s a bit too obvious that the song was written, not by Pickler herself, but by a co-writer (Leslie Satcher) who did not have Pickler’s firsthand experience, as the lyrics ring hollow for want of detail.  To her credit, Pickler sings it with gusto, and her producers dress it up with plenty of fiddle and banjo, making for a song that is sonically engaging but lyrically uninspiring.  Similarly, the production and vocal elevate the not-particularly-interesting road song “Little House On the Highway” to a degree, though it still ranks as one of the album’s more forgettable cuts.  The only instance in which production becomes an issue is in the overdramatic bridge on the title track, which culminates in an intrusive guitar solo.

Pickler shines brightest when she gets personal.  Drawing on her troubled childhood, she addresses both of her parents in songs with the tracks “Mother’s Day” and “The Letter (To Daddy).”  The former, written by Pickler with husband Kyle Jacobs, connects solidly by isolating a specific childhood experience that many listeners can relate to – buying a Mother’s Day card, having a photo taken with one’s mother – with Pickler expressing how she wishes she could have experienced such things for herself.  Though both songs mourn the heartaches of the past, they also cast a hopeful eye toward the future.  “Mother’s Day” finds Pickler vowing to be the mother she never had, should she ever have a child of her own, while “The Letter” concludes with Pickler determining to “make up for lost time” with her estranged father.  Best of all, both tracks utilize sparse acoustic production, allowing Pickler to connect deeply with some of her most beatifully restrained and compelling vocal performances to date.

All in all, there is much that 100 Proof gets right.  By placing Pickler in the musical environment that suits her best, and giving her a strong batch of song material, 100 Proof demonstrates that Pickler’s potential is significantly greater than her previous efforts suggested.  Without a doubt, 100 Proof is Pickler’s strongest album to date, and likely one of the better mainstream releases we’ll hear this year.