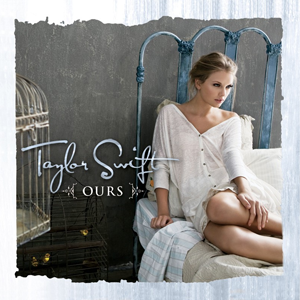 With the sixth single from Speak Now (which only appears on the deluxe edition), Swift goes for a raw understated style in both production and vocal, and it suits her quite well.  Though regularly criticized for weak vocals, particularly in a live setting, “Ours” is an instance in which Swift is able to work with her vocal imperfections instead of against them.  She turns in a disarmingly compelling performance, such that even the technical imperfections serve to enhance the emotional qualities of the song, as opposed to being a serious liability as in times past.  The treatment allows Swift’s natural authenticity and sincerity instead to be the focus of attention.

By telling a story through easily accessible word pictures – How many of us can’t picture the vacant stares of strangers in an elevator? – the song comes across as an effective musical expression of the comfort of having something special that no one can take away.  In addition, the tastefully restrained production and vocal will make it a pleasant mood-breaker on typically bombastic radio playlists.  For Swift, “Ours” is the latest in a series of very good singles, which only heightens my interest in what her future efforts will bring.

“People throw rocks at things that shine” is just a great line.  A “Hey, let me go back five seconds and make sure I heard that” great line.

My big thing with Swift has always been that I’m too old to be her target audience, and her vocals aren’t interesting enough to sustain my attention.  But the gap is narrowing, and as she’s getting older, her observations are seeming more astute.

“Ours” is charming, breezy, and sustains my attention.  I don’t see myself hitting repeat in the way that I did with “Mean”, but I’m certainly enjoying it enough to revisit it again.  That’s about as high as my praise gets for country music in 2011.

This past March, Taylor Swift added her refreshing perspective to a long line of recent radio songs concerning the issue of bullying and peer-pressure in consequence of embracing ones individuality with “Mean.”

If that was her “Firework”, this is her “Hey There Delilah”.

“Ours”, the fifth single from “Speak Now” (and the first from the Deluxe Edition) showcases a notably more understated production; a slight departure from the defensive posturings and romantic exigency that have peppered most of her back catalog to date.

Much like the aforementioned and unabashedly sincere 2007 Plain White T’s smash, where frontman Tom Higgenson opines in the bridge that their friends would all make fun of them if they attempted to walk across the country to rendezvous, but would just laugh along with them because “none of them have felt this way”…….Swift sheds light on the silence of strangers in the opening verse of “Ours” and asserts, if her love interest was here, they’d “laugh about their vacant stares.”

However, unlike “Hey There Delilah”, which concerns a star-crossed romance spanning a thousand miles and how absence makes the protagonist’s heart grow fonder, “Ours” illustrates a relationship separated not by mile markers, but by life’s obligations and peer pressure. Nowhere is this made more explicit than in the song’s chorus, which features the stand-out interjection: “People throw rocks at things that shine” and that, in effect, life makes love look hard.

Considering how comparatively stripped-down the production of this track is compared to previous outings of hers, it’s curious to see Swift maintaining her defiant pose here and pointing her finger out at naysayers. As cohesive and believable as the lyrics are here, the chorus can’t help but feel underdeveloped and tame, especially since Swift declares that the stakes are high and the water’s rough. The way she mouths those lines with relative ease would lead you to believe it’s actually low tide as she speaks.

Despite the somewhat rushed and dispassionate chorus, Swift maintains here a penchant for construction and conviction that made her previous singles “Sparks Fly” and “Mean” stand-outs as well. There is a keen continuity that ties each of its parts together into one attractive package, with the opening verse implying her time is theirs, before clocking in her hours by the second chorus and exclaiming her love interest is now hers, and finally tying up the loose ends with an effective bridge that reassures him, as she inevitably places her nose to the grindstone again and is pummeled by a barrage of additional peer pressure, that her faith for him is exemplified with this here song.

With the lugubrious winter overcast enshrouding most of the nation presently, “Ours” is certain to resonate with countless anxious lovebirds yearning for reassurance and clarity, and should prove to produce yet another Country radio hit to add to her burgeoning collection. What remains to be seen is whether this can also replicate the success of “Hey There Delilah” on Adult Top 40 and Mainstream Top 40 radio, and deliver her first decisive crossover hit this album cycle……….or if it’ll be subjected to yet another round of vacant stares.

We’ll just have to let the jury decide that, shall we?

From the first lines of “Ours,” Swift dismisses the points-of-view of anyone outside the limited, insular sphere of her immediate romantic concerns. Thus, when she spends the rest of the song trying to mine dramatic tension from everyone else’s disapproval – which, but for the line about, “Any snide remarks from my father about your tattoos will be ignored,” are far more vague and impersonal than in her best songs – it rings completely hollow. The mixed metaphors and disjointed, non-sequitur statements in the chorus just don’t make me believe that she has any reason to be so defensive about the relationship, and Swift’s believability is one of her best attributes as a artist. With something like “Enchanted” still waiting on Speak Now, “Ours” should’ve remained a for-diehards-only bonus track.

It may not be as evocative as “Sparks Fly” or as fresh as “Mean,” but “Ours” is a solid, graceful way to close out Speak Now. The beauty – or perhaps irony – of Swift’s catalogue is that despite her flawed performances, there isn’t anyone who could sing her material as effectively as she does.  She builds herself into the fabric of “Ours,” literally (“I’ll…give you faith with this song”), emotionally (the subtle laughs) and lyrically (“lip gloss smiles” is signature Swift).

That’s the thing – told by a lesser artist, this story would be obnoxious; told by Swift, it’s deliciously dramatic. She nails the blindly passionate, narrow-minded youthful perspective but does it so charmingly that you forget to be annoyed. And while it’s hard to tell if the drama is warranted, there’s no doubt “people throw rocks at things that shine” is one of the best lines of 2011, as truthful as it is cleverly written.

Everyone has already said it, but”Ours” is impressively understated in both Taylor Swift’s vocal deliveryand its folky production. The instruments don’t compete with each other and, even better, Swift doesn’t compete with the instruments.  Instead, there is no point in the song where her voice is grating, rather, it is actually quite pleasant  and even softly nuanced throughout the song.

Furthermore,we hear her continue to grow as a songwriter. While it’s still not perfect,there are flashes of near brilliance in lyrics such as “People throw rocks at things that shine” and the vivid depiction of something as typicallymundane as awkward moments in an elevator that make her prefer to take thestairs in the end.

It hasn’t been lip service up to this point from me when I’ve praised Swift’s ability to capture young people’s feelings, even if they are such that I can’t personally relate, but I agree with the others who feel that this song provides solid hope for the growth that so many people have believed she would make as she got older and more mature herself.

The mix of the gentle and satisfying production (save the minor distraction of the moody, plinky piano), a pleasant melody and her best vocals makes for Swift’s strongest song to date.